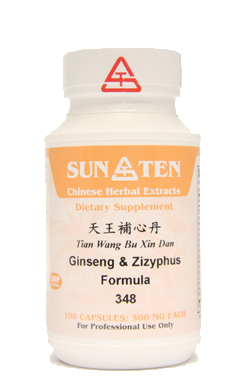 What Tian Wang Bu Xin Dan is Best For

Tian Wang Bu Xin Dan may be used for the following:

Tian Wang Bu Xin Dan translates as The Heavenly Emperor’s Heart Tonic Pill was created in the 17th century by Hong Ji. The formula’s name comes from Hong Ji’s belief that one of the mythical heavenly emperors revealed the formula to him in a dream. Known as world protectors, the heavenly emperors fought against evil and guarded the four corners of the world. Among its many uses, this formula was also used as a tonic to prolong life.

Yuan Zhi: an herb that calms the mind, relieves anxiety, and clears phlegm

Tian Dong: an herb that relieves dryness in the lungs and clears heat

Mai Dong: an herb that generates fluids, resolving dryness, and benefits the lung

Dan Shen: a root that improves blood circulation, regulates the menstrual cycle, and calms the mind

Suan Zao Ren: a seed that calms the mind and promotes restful sleep

Jie Geng: a root that clears phlegm, benefits throat, and guides herbs to the upper body

Concentrated powders of natural herbal products tend to absorb moisture from the air. Hence, it is necessary for the manufacturer to add a suitable amount of excipient to stabilize the concentrated herbal products. Non-GMO starch are used as excipients.

There are no reviews yet.

Be the first to review “Ginseng & Zizyphus Formula” Cancel reply

These statements have not been evaluated by the Food and Drug Administration (FDA). Products are intended to support general well being and are not intended to treat, diagnose, mitigate, prevent, or cure any condition or disease. If conditions persist, please seek advice from your medical doctor.